Kiyoharu Jomon Exhibition: Art in the Age of Invisibility – Akira Wakita and more. 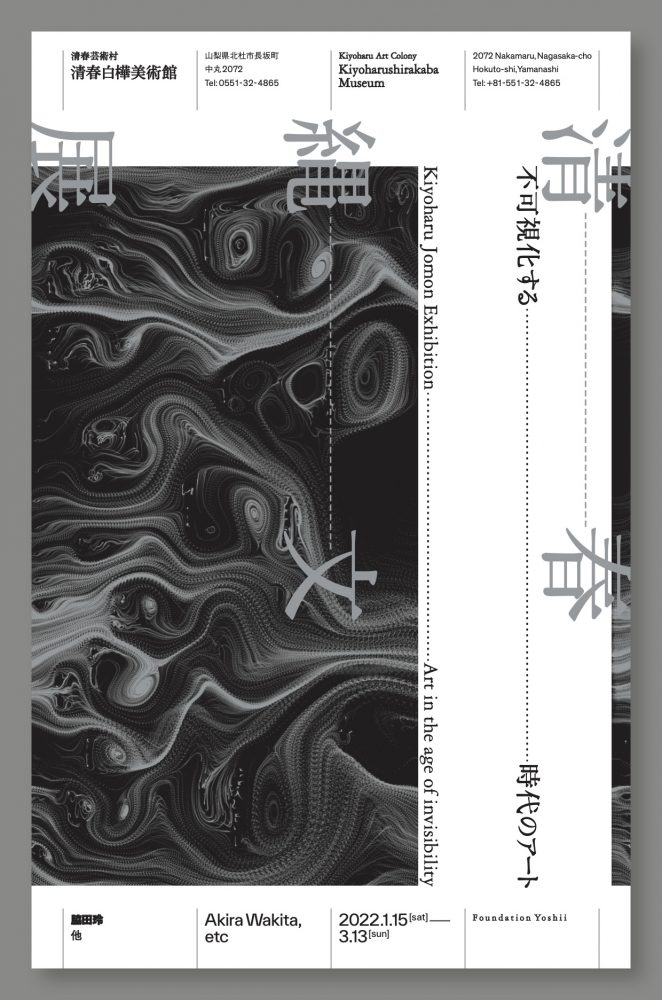 Art in the age of invisibility

In the process of creating works based on computational fluid dynamics,
I am struck by the mysterious impressions and primordial aesthetic sensations of its fluidic forms that well up from deep within my body.

When I saw the Jomon pottery in front of me,
I realized that my body was filled with sensations that were quite similar, if not identical, to what I had at the process of creating works based on computational fluid dynamics,

The sudden appearance of powerful whirlpools, the complex asymmetry yet unbroken harmony, and the organic curves and surfaces that are reminiscent of reptiles and amphibians;
the formative characteristics found in them are common to both computational fluid dynamics and the Jomon pottery.

It is very strange that the fluid images that emerge through the use of computers, the symbol of modern technology,
are so similar to the patterns of earthenware, the symbol of the Jomon period.

How were the Jomon people able to create such complex fluidic forms in an age without computers?

What kind of landscape and the world did the Jomon pople see?
The Jomon must have possessed a physical and spatial sensibility that is beyond our imagination, as they spent their days in a fierce of struggles facing their prey with all their might,
in a situation where they could not afford to live or die, hunt or be hunted. In addition to such physical and spatial senses, their creations may have been related to the Jomon’s unique spiritual world of magic*.

On the other hand, in this digital era today, while big data and AI seem to be making things “visible,” we may actually be living in an age of “invisibility.
In the COVID-19 pandemic, we are striving to see the truth. However, it seems that many people do not directly touch the data with their own hands but they actually seem to try to grasp the world through the mass media, which is rife with inflammatory headlines and fake news.
Like the Jomon people of old, shouldn’t modern humans acquire the body to run through the forest of data and try to capture the truth with all our might?

What do we see, and what do we not see?
Didn’t the Jomon people see more than what we do now?
In the midst of a world in turmoil due to the pandemic, such questions come to mind.
In this exhibition, by juxtaposing Jomon pottery and stone tools with fluid images based on data science, I wanted to reexamine what it means to “see” and “be seen” for us.