The Hokuto Art Programme has opened. 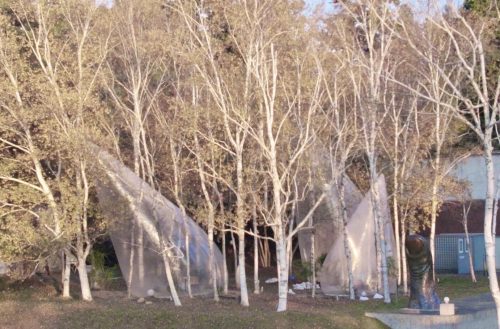 I came up with an idea of a tent that captures such a moment when you’re standing still in the middle of the forest, looking up and around. Three transparent teardrop-shaped tents are placed in the birch forest; the size, height, and position of these tents were decided based on the 3D scan of the surrounding environment, which calculates the layout of the trees, while the way the branches and the leaves spread and grew were also taken into consideration to the final design. The picture of this work is as if you’re letting go of the teardrop’s sharp tip in the center and it loses it balance. It would bounce on the ground making these traces when they fall in various directions due to the law of physics, with the surrounding greenery reflected on their surface. 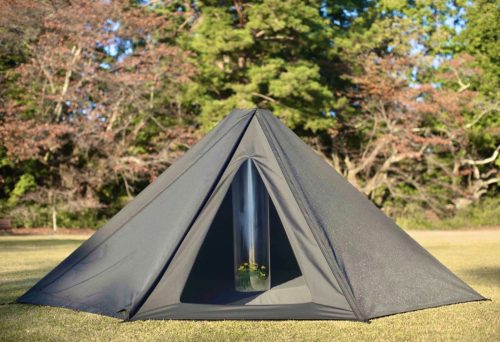 Although a tent is supposed to be built in an environment that is rich in nature, the interior of a tent has a closed atmosphere barely having a connection with nature. Therefore, I thought to myself what kind of relationship would human and nature have, if it were a tent that actually had an intimate connection with mother earth. Having found a plant or flower you like, cover them in a clear cylinder with care when setting the tent. This is a tent that literally cuts out a piece from the ground of the earth, allowing you to spend a spontaneous night with nature. 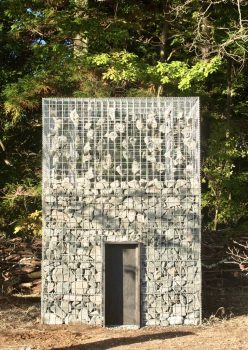 This work reinterprets the word ‘mobile’ in terms of two key words: ‘reversibility’ and ‘simplicity’ and is an architecture that circulates in nature. The architecture is composed of ‘stones’ that make up the earth. In the cycle of nature, it is constructed as if the earth is rising and taking root in the land, and then dismantled and returned to nature as if it is weathering. There, the function of the sauna is incorporated into the spatial experience as an experience of feeling the earth to the maximum extent. 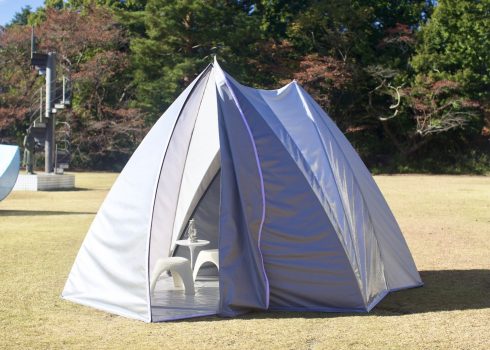 Returning to Toyoò Ito’s ‘Tokyo Nomad Girl’s Wrap’ of 1985, the idea was to create a tent for the modern nomad, evolving from the ‘wrapping’ of the metropolis interior to that of the Hyper Village, from an inwardly individual wrapping to a wrapping that embraces diversity. The tent fabric, whose shape is defined by three-dimensional cutting like a garment, wraps the outside of the freestanding frame, which expands from the inside, a little loosely, creating a half-closed, half-Open Clopen space, in an attempt to create a tent not for sleeping but for spending time. Once conceived as an extension of furniture, the nomadic cloak was over time redefined as a ‘de-Tokyo nomadic cloak’ as an extension of clothing and home.

One square mat. Defines an area about halfway between a garment and a tent. The structure-free material, which can be folded freely, and the simple system of fastening each point, allow for a variety of personal spaces to be represented. From primitive to sculptural, the physicality and use of the user is expressed in form. As the pandemic has made us rethink the collective and individual sphere, I wanted to propose something that would allow people to feel the origin and pleasure of creating their own environment, just as creatures instinctively build nests or children build bases out of bedding. 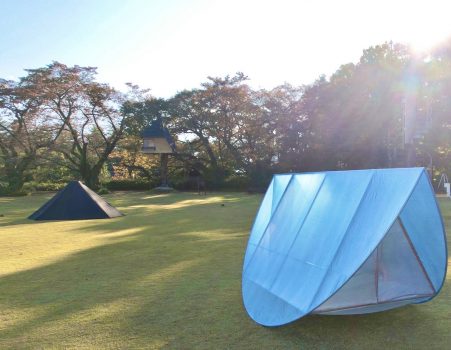 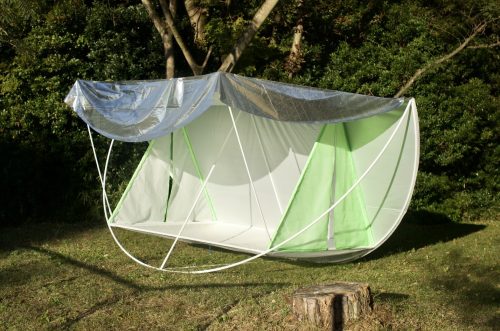 The idea was to create a hammock-like tent that would be comfortable in nature. An equilateral triangular tube is suspended inside a circular frame folded in two to raise it slightly off the ground, making it comfortable even on uneven ground. The tent is like a shimmering geometric object that allows you to feel your own and others’ bodies as well as play, but it can also be fixed with strings and can be used as an inner or outer tent to make it more habitable. 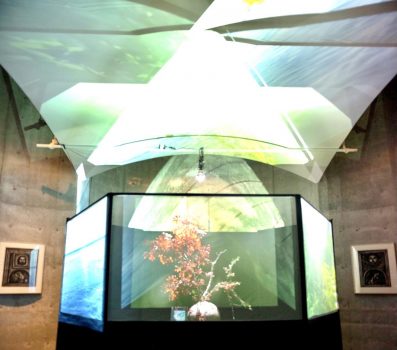 I want to stare at it all the time and more.

I wish it could repeat, repeat, connect and continue.

Water, wind, leaves, light… these things radiate the beauty of the present moment.

In this way, we meet the ‘now’ that will come again.

Life repeats itself, marking time and moving on to the next.

There is no ‘now’ anymore, and the person you were a moment ago is no longer here. 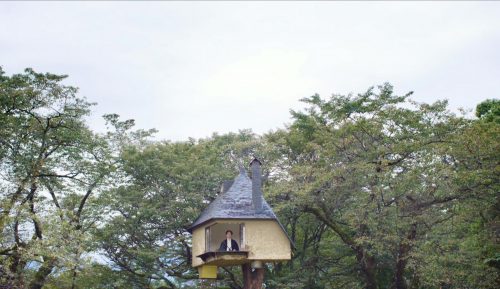 Title: ‘The beauty of the game process (in the Mahjong term), please go ahead and start your tea.’ 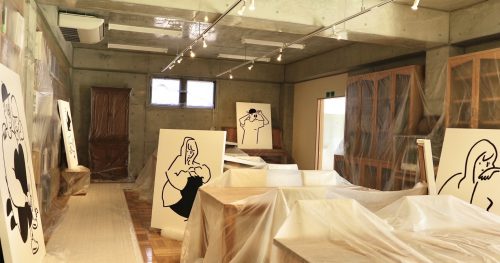 Following the only term given by the organizer, ‘Boundaries and Absences in Art’, the exhibition focuses on the ‘boundaries’ between Nagaba’s two titles, ‘illustrator (illustration)’ and ‘artist (art)’ and takes as its subject the ‘carrying-in’ that is assumed to exist on one side and not on the other. The unstable space where the carrying-in takes place will also be the ambiguous blurred space ‘between’ the two matters. 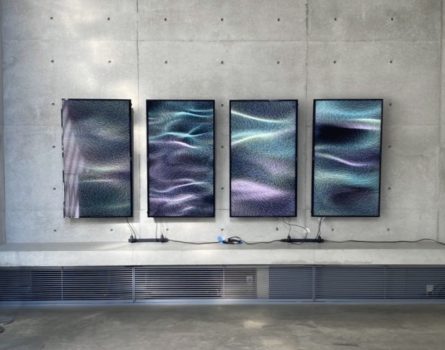 The work consists of four images. The harmony of the colours and forms is constantly changing, oscillating from harmonious to dissonant. Each image intervenes in the harmonic structure of the other, and order emerges again out of chaos. The repetition of tension and relaxation reflects various intentions and thoughts, leading to a new dimension of harmony beyond. 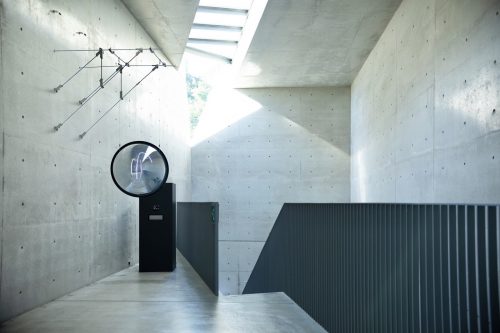 In this work, a sculpture in the shape of a hemisphere is irradiated with light of different properties output from a laser and a projector respectively. The shape of the irradiated light is distorted and transformed to draw curves and curved surfaces due to the nature of the reflection that exists inside the sculpture, which maintains its shape under a certain physical pressure, and repeatedly appears and disappears, behaving like a kind of life form. 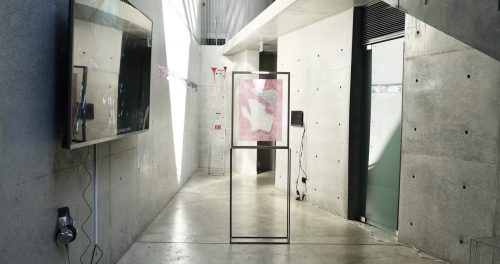 We named them Super Cells, referring to the amazing cells that continue to live even after being cut open, cancer cells that have been affected. They challenge human society not only with the possibilities of regenerative medicine, but also with the ownership of life and new ethical values.

As an introduction, we will tell the story of the process of how a citizen, who is not a medical professional or researcher, began to own a Super Cell. 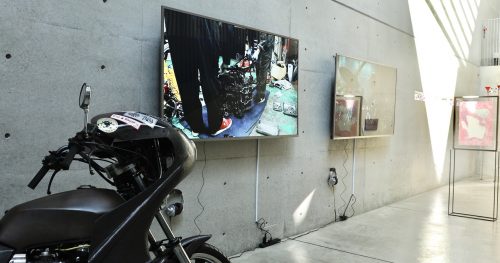 In human history, 5,000 years after the Hittites began using iron and 130 years after Daimler invented the first motorcycle, engines made from such iron are about to become a technology of the past. In Japan, the motorcycle gangs extended their functions as tools for physical expansion and created stylistic beauty. This machine, which renews an activity that continues even now that the sun has set using dying craft techniques, will be one of the relics that suggest the Japanese aesthetic. 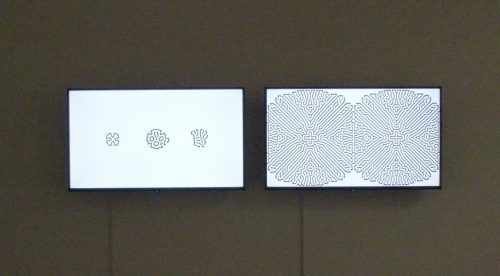 For Alan and Keith

The idea was to create a timeless dialogue between Alan Turing and Keith Haring, two geniuses who lived in different eras as sexual minorities. I also included secondary messages such as a mathematical reinterpretation of Haring’s drawings and the evolution of the diversity debate from homophobia to LGBT. 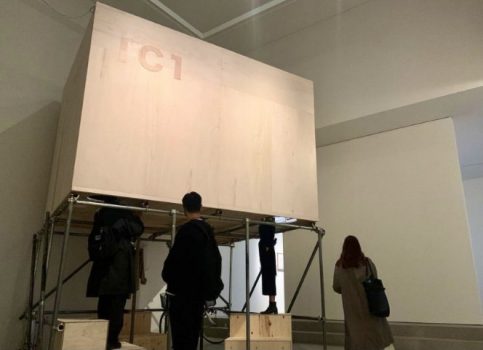 In this exhibition, an imaginary room has been created in the likeness of a SIDE CORE member’s house or studio, where the viewer can look into the private space and view the artworks. In this space, which can be described as a memory room, different meanings are given to the works depending on the angle from which you look into the room and the combination of the works you see.

SIDE CORE has developed a project based on research into street art, which has led to a collection of works by Keith Haring as a historical reference, works by various artists who shaped the subsequent era, and works by teenage artists active on the streets today, like Keith once was. The collection even includes works of art, and the collection weaves a story that transcends time and place. Take a look inside Keith Haring’s brain at this museum and get a glimpse of the ‘stories that follow’ as seen by SIDE CORE.